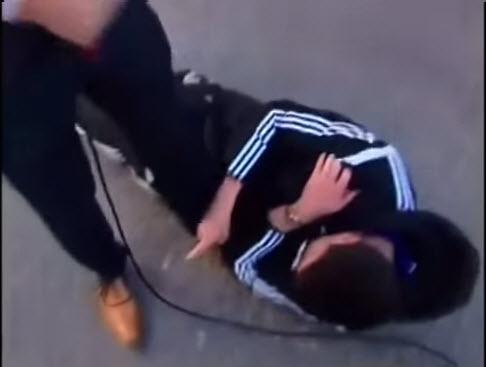 "What are those?" Kyle Lafferty Sky News Interview Goes Viral

Memo to people working in television: be prepared for every eventuality to happen live on air especially with the new "What are those?" craze going around.

Our regular customer, Paul Gilmour, a Sky News reporter certainly got caught out by funny-man Norwich City and Northern Ireland striker Kyle Lafferty during a live TV interview - watch >> Kyle Lafferty on Sky Sports News... "What are those?"

Mimicking the now-famous video (with over 17 millions views) depicting a police officer's clunky black boots and a voice in the background which shouted, "What are those?", Lafferty jumped at the chance to take a jab at Paul's footwear of choice. And as you have probably guessed, the footwear of choice was none other than the designer handmade English brand Barker and the shoes he was referring to were the Barker McClean - Robinson's Shoes best sellers!

The phrase "What are those?" has become such a phenomenon, it landed its very own spot on Urban Dictionary. According to the site:

"This is what you say/scream when you see someone wearing shoes or other footwear that are dirty and/or non-brand unknown. You should also point your finger in the air then while saying, "What are those?" Make your way down to the person[s] shoes, all while their back is turned."

Judging by the look on Gilmour's face, he clearly wasn’t ready for that one. We think he saw the funny side though. And we know there isn't a chance that the uber stylish Paul Gilmour would leave the house without his Barker McClean's polished and gleaming.

We secretly believe that Kyle Lafferty was a tad jealous of the shoes. You know where we are Kyle if you want a pair the same!