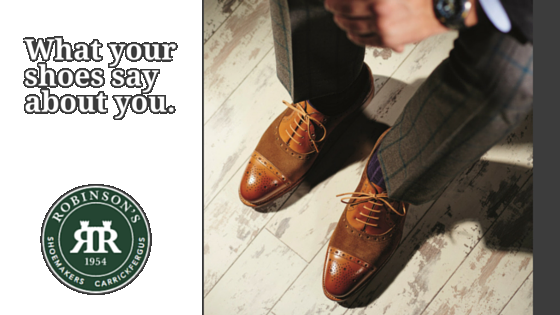 What your shoes say about you

Footwear, in all its shapes and forms, says a lot about a person’s personality and style. Fashion, by its nature, is one of the many ways we can express out personality; it allows us to present an image of ourselves to the world that we can personally craft and alter ourselves. Clothing speaks on a subconscious level; as does your footwear. Here’s what your shoes say about you; we can’t guarantee to get everything right, but we think we’re pretty close.

Brogues suggest a man who is classically stylish; they’re a reliable choice, and always fashionable. They can be worn in a range of different ways, each of them indicative of a different kind of man. Brogues with a suit suggest an organised, tidy, sensible fellow, but brogues without socks and worn with rolled up jeans suggest a creative, artistic flair. Leather brogues suggest a more traditional man, while suede brogues belong to the traditionalist who isn’t afraid to mix things up.

Boots can say a lot about a man. A classic leather Chelsea boot belongs to the man who knows how to dress; he prefers neat tailoring and well fitted clothing. Trendy and understated, the man in Chelsea boots is always groomed to perfection, whether it be a lazy afternoon in, or a night out on the town. Worn with skinny jeans, darker leather boots suggest a guy who doesn’t follow the crowd; and is someone who probably has a fantastic music collection at home. Desert boots suggest a slightly more hipster vibe – this man probably enjoys good coffee and craft beers.

Trainers are the ultimate shoe for comfort, and this says a lot about the man sporting trainers as part of his day-to-day look. This man has a casual, laid back vibe, with a sporty, street edge. He likes being comfortable; you might see him sporting a pair of well-fitted jeans and an edgy jacket to complete this look. Effortlessly cool and chilled out, he’s comfortable in himself and his style.

Knowing what your shoes say about you helps you to create the perfect look for any occasion. Loafers suggest traditionalism; the man who wears loafers knows what he likes and knows what suits him and his style. However, loafers have been making waves in the fashion world lately, and are fast becoming a style staple of young, fashionable men. Usually paired with rolled up chinos and a white shirt, loafers are indicative of a man who knows how to dress, and loves the finer things in life. This is a man who knows his Merlot from his Cabernet Sauvignon.

The man who wears boat shoes may or may not own a boat; but that’s not the point. Boat or deck shoes suggest a man who is relaxed, well put together, and enjoys long, lazy summers on the beach or by the pool. He’s probably sporty, outgoing, and sociable, and enjoys nothing better than hitting the beach as soon as it’s sunny outside.

As you’ve probably guessed; we think shoes are important. So important that we only offer the best in luxury men’s footwear. Why not call in for a free fitting and let your shoes speak for you?